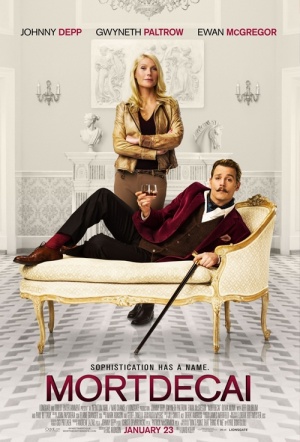 Juggling angry Russians, the British MI5, his leggy wife, and an international terrorist, Mortdecai heads to America armed only with his good looks and misguided charm in the race to recover the prized artefact. Depp is reunited here with Secret Window director David Koepp. Mortedcai is an adaptation of the four-part, 1970s book series by Kyril Bonfiglioli.

Mortdecai isn't quite as awful as the trailers and advance public response would have us believe – the breezy caper antics occasionally spark and the winsome supporting cast seem to be having fun. But it unfortunately cannot overcome the superlatively grating central performance from Johnny Depp, who plumbs new depths of crapulence here.

There’s a fatal shortage of zingers to supplement its exhausting zaniness.

Depp may be suffering the most catastrophic career slump since Eddie Murphy said yes to Norbit, but he’s still perfectly watchable.

Depp's wizardly expertise at disappearing into a character is intact. But what if that character isn't funny and hasn't an ounce of charm?

Compared to the mustachioed gurning going on here, Depp's Captain Jack Sparrow was a study in bleak Bergmanesque understatement.

David Koepp’s strained farce is like Being John Malkovich if Malkovich were a mustache entering its own whiskery portal.

Those who do find their way into this supremely silly action-mystery caper are in for a few grins if not laughs thanks largely to the deft - and daft - performance of Depp.

Mortdecai is an anachronistic mess that never succeeds in re-creating the breezy tone or snappy rhythm of the classic caper movies that it aims to pastiche.

Very close to disastrous, there's an unavoidable feeling that Gwyneth Paltrow and co. are having much more fun than you are, what?