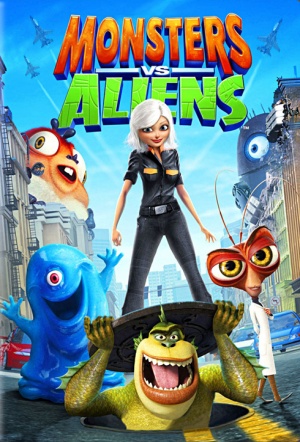 A rag tag group of monsters are recruited by the American government to protect Earth against alien invaders, in this DreamWorks animated family film. Featuring the voices of Seth Rogen, Will Arnett, Reese Witherspoon, Keifer Sutherland, Rainn Wilson and Hugh Laurie.

Susan (Witherspoon) is about to get married when she gets hit by a meteorite, and turned into a massive giant of a woman. She is taken to a secret government centre where she meets the nation's other captured monsters: B.O.B. (a gelatinous blob voiced by Rogen), Dr. Cockroach phD (a scientist with the head of a cockroach, voiced by Laurie), The Missing Link (an ape-like swamp thing, voiced by Arnett) and skyscraper-sized mutant larvae Insectosaurus. Alien invader Gallaxhar (Wilson) arrives on Earth, wanting to get his mitts on that meteorite. After destroying San Fransisco to get it, the monsters are released to protect mankind. Mayhem ensues.

Monsters vs. Aliens spins a modern twist on classic horror monsters like the 50-foot woman, the Fly, the Blob, Mothra, and the Creature from the Black Lagoon. It throws in a little sci-fi inspired by The Day the Earth Stood Still and Close Encounters of the Third Kind to create a high-concept mash-up so suited for mass entertainment that you’d wonder why nobody had thought of it before.

A film of chuckles, smiles and light amusement rather than big laughs, galvanizing excitement and original invention.

A snappy script and some neat 3D make for an above-average romp with plenty of in-jokes for cineastes and fan-boys alike.

The movie is curiously unmemorable, partly because nearly all of its humor depends on your having seen something like it before, even if you haven't.

3-D is a distraction and an annoyance.

Worth seeing purely for Seth Grogan perfectly cast as a brainless alien.

I guess I was disappointed the story didn't entertain me as much as I'd hoped it might.My almost four-year-old niece Molly was pretty entertained though, and she thought the whole 3D thing was very cool.

In fact "nice" is the adjective that seems to surface most in trying to pin down the film's most salient quality, which means that while the film is enjoyable enough, it is unlikely to become a classic for us, or a "Shrek" sort of franchise for DreamWorks.

There is a nice mix of action with tender moments -- especially among the misfit monsters.

The adult jokes and mandatory pop-culture references mean it will only sporadically hold the attention of the under-fives, who will struggle to keep the large 3D glasses on their faces anyway. For everyone else, it's a great way to blob out.