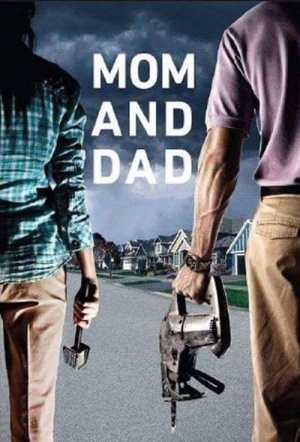 Nicholas Cage and Selma Blair are two parents on a mission to murder their kids in this black horror comedy from Crank director Brian Taylor.

"Mommy and Daddy ain't alright, and they're definitely more than a little weird in this pitch-black horror comedy that imagines a 24-hour nightmare where parents worldwide succumb to a mysterious mass hysteria that turns them violently against their own children. It's a macabre and inspired conceit, and one mined for biting social satire by writer/director Brian Taylor on his first solo outing since his gonzo collaborations with Mark Neveldine (the Crank films, Gamer), which similarly provoked and parodied cultural bugaboos." (Toronto International Film Festival)

If the 2014 scary movie The Babadook was a metaphor about the fear of being a bad parent, the bat shit crazy horror-comedy Mom and Dad can be its gnarly counterpoint: a grotesque fantasy about pent-up parental rage exploding into violence and carnage. Writer/director Brian Taylor explores mid-life crisis by way of George Romero-esque contagion, casting Nicolas Cage and Selma Blair as middle class American parents who – like their similarly white picket neighbours – transform from normal, disillusioned people into murderous maniacs intent on killing their children.

Though sure to be distasteful for some viewers even to ponder, this giddy exercise transcends mere bad-taste humor to become one of the great jet-black comedies about suburbia.

An exploitation movie that, paradoxically, exhibits too much good taste. Still, expect “Saws all!” to become a 2018 catchphrase.

Mom and Dad is both a torrid exploitation cinema throwback, and a metaphor for a generation of kids screwed over by their elders.

This is an unrepentant midnight movie, dirty and violent and best enjoyed with a steady supply of alcohol.

Zero-to-60 speed crazy is pretty much right in Cage’s wheelhouse...