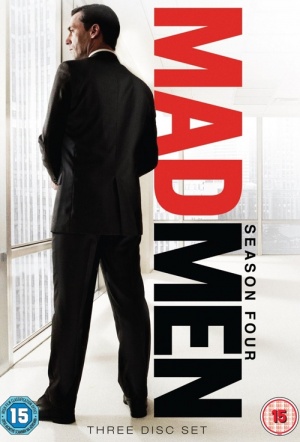 Set in 1960s New York, Mad Men is a critically acclaimed drama created by Matthew Weiner (The Sopranos producer), following the lives of the ruthlessly competitive men and women of Madison Avenue advertising, an ego-driven world where key players make an art of the sell.

In season 4 (13 episodes), ad man and ladies man Don Draper (Jon Hamm) continues to make plays in the boardroom and bedroom, as he struggles to stay a step ahead of the rapidly changing times and the young executives nipping at his heels. He divorces from his wife while his new agency Sterling Cooper Draper Pryce begins business.

Winner of 13 Emmy Awards since the show began, including in 2010 Best Drama Series and Best Cast in a Drama Series.
2010USALionsgate Television
DramaTV Show

This hour finds the cast in fine form, but the most interesting crumb to emerge might be Weiner's apparent rumination on the program's success and--speaking through his protagonist--his own heightened profile since the series took off.

What is not surprising at all about the fourth season of one of television's elite series is that Weiner continues to explore what it means to be human.

For all its moments of poetry and insight, Mad Men too often feels less like a drama and more like the staging of a really good master's thesis.

One surefire sign of a television series in its prime comes when an episode's plot and subplots dovetail so stylishly that it's difficult to tell which is which.

You should feel nervous before any great date, and Don never disappoints. He'll make you feel like you are in on the joke with the innest in crowd on television. Anything these ad men are selling, I'll buy.