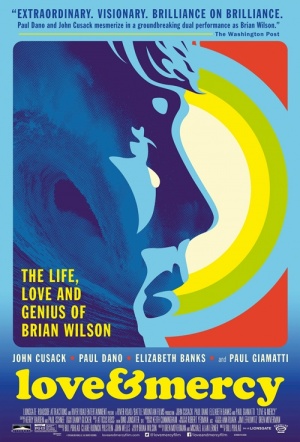 Dano (There Will Be Blood) and Cusack (High Fidelity) play the young and old Wilson respectively, while Elizabeth Banks (The Hunger Games) is Wilson's second and current wife, Melinda Ledbetter. This is the first film directed by Bill Pohlad for over 20 years, his producing credits include 12 Years A Slave, The Tree Of Life and Brokeback Mountain.

A fascinating life does not necessarily a fascinating biopic make. Thankfully Love & Mercy zeroes in on two specific phases of Beach Boy Brian Wilson’s troubled life, sparing us the dreary chore of ticking off all significant events along the way. Relief also comes by way of casting, with no prosthetics or uncanny valley CGI required to bring younger and older versions of Wilson to life.

A wonderfully innervating cure for the common musical biopic...

It's a loving tribute to the Beach Boys and the man responsible for their distinctive sound, but it goes to deeper and stranger places than most movies of its kind.

Wilson's life has been unusually rich. This biopic, like any biopic, is a cocktail of fact and myth. It's very sensitive to its subject, which can sometimes leave it feeling slight.

An earnest attempt to convey the essential truth of Wilson’s extraordinary career and difficult life animates both halves of the film, and both performances.

Musically, the film is a miracle, right and riveting in every detail.

A deeply satisfying pop biopic whose subject's bifurcated creative life lends itself to an unconventional structure.