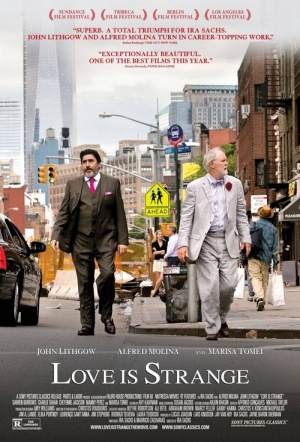 After 39 years together, Ben (Lithgow) and George (Molina) take advantage of the new marriage laws and tie the knot in a City Hall wedding in lower Manhattan. On the return from their honeymoon, however, and on account of their vows, Ben gets fired from his long-time job as a choir director for a co-ed Catholic school. Suddenly, with no real savings to count on, the couple can’t afford the rent on their small Chelsea apartment.

Deciding to temporarily live apart until they can find an affordable new home, George moves in with two cops who live downstairs while Ben lands in Brooklyn with his family. While struggling with living apart, Ben and George are further challenged by the intergenerational tensions and capricious family dynamics of their new living arrangements.

It's hard to picture a more charming screen couple than John Lithgow and Alfred Molina. Who wouldn't want to spend 90 minutes in their company? Besides this casting coup, and the (presumably substantial) difficulties of financing a film about elderly gay men, Ira Sach's genteel effort must be considered a missed opportunity, maybe worse.

Beautifully observed ensembler shines on the strength of its two leads, John Lithgow and Alfred Molina.

The story of George and Ben seems to have been plucked from a meadow of narrative possibilities; an interesting movie could have been made about everybody in this one.

One of those quiet movies that sneaks up and punches you in the face, just as you were thinking "What does any of this add up to?"

Finds the drama in any moment without pushing too hard, and uses small details to bring relationships into focus.

A sprawling yet intimate narrative, constructed almost entirely of in-between moments rather than the big turning points and tragedies.