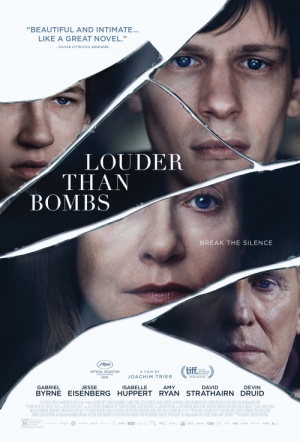 On the eve of an exhibition honouring noted war photographer Isabelle Reed (Huppert), whose career was cut short in the wake of her untimely death, a father and two sons grapple with her domestic and professional legacy. Flashbacks of Isabelle’s conflated role of wife, mother and photojournalist intermingle with the present-day attempts of the Reeds to manage their grief amid combat of a different kind.

Family patriarch Gene (Byrne) discovers secrets about his late spouse while pursuing a new romance and struggling to connect with teenage son Conrad (Devin Druid), who hides in video games and introspection. Adult son Jonah (Eisenberg) takes leave from academic and married life to organise his mother’s archive, only to slip into reckless behaviour. Past and present coalesce in sharp focus as the surviving Reeds come to terms with love and loss — locating in memories both painful and joyous the skills they need to soldier on…

Manages to be glaringly obvious and admirably subtle in the same breath.

A tasteful grieving-family weepie, it's conceived and performed with utmost sincerity, yet lacks the intemperate human authenticity...

The characters are so carefully drawn that they can feel smaller than life, and the dramatic space they inhabit has a curiously abstract feeling.

A rather silly, pointless and directionless film.

Beneath the well-worn dysfunctional-family setup are bracing observations of the human coping mechanism.

While it's well acted and has strong moments on a scene-by-scene basis, the film lacks an emotional center, keeping the impact cool and diffuse where it should be affecting.

...a measured, meditative reflection on grief, memory and identity....