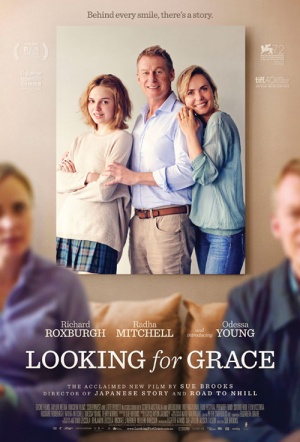 Award-winning Australian filmmaker Sue Brooks (Japanese Story) writes and directs this tale about a runaway teen, her worried parents, and the detective hired to help. The narrative is broken into sequentially overlapping parts, each changing the perspective of the story between the main characters.

"Grace (Odessa Young) is a small-town teenager. When we first meet her, she's on a long bus trip with her best friend Sappho (Kenya Pearson) through the vast, dry Australian landscape. We don't know where they're going, but we know this trip is an escape. When an older boy (Harry Richardson) gets on the bus, both girls are intrigued, but Grace is the bolder one. At an overnight motel stop, she makes a choice that changes her friendship with Sapph.

"Shift perspective to Bruce (Myles Pollard), a long-distance truck driver we saw in passing earlier. Then to Tom (Terry Norris), a cop. Then Grace's mother, Denise (Radha Mitchell), then her father, Dan (Richard Roxburgh). As we move from one character to another, the complete picture begins to come into focus: Grace has run away from home. Her parents are frantic. Money is missing. Her father holds a secret. And the police are investigating, though not terribly well." (Toronto International Film Festival)

A jigsaw puzzle of insignificant things form the canvass on which Sue Brook's drama about guilt and loss are set... (they) do come together, although some like me, may not be satisfied by the outcome.

If you yearn for an evocative, intriguing local film to see on Australia Day, this one will not disappoint.

There are things to appreciate - including Young's performance and strong support from Radha Mitchell - but the fling-us-here and fling-us-there structure ultimately feels gimmicky, and lacks a certain grace.

The tone lurches into awkwardness, undercutting the emotional impact.

Right from the get-go, Looking For Grace throws tonal consistency out the window, bouncing from broad comedy to serious drama at will, and not always seamlessly.