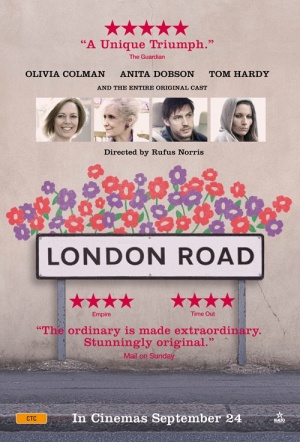 Olivia Colman (Peep Show) and Tom Hardy (Mad Max: Fury Road) lead this adaptation of the stage musical, following the true criminal case that shook the quiet town of Ipswich when the bodies of five women appeared in 2006. Based on the National Theatre's stage musical by Alecky Blythe and Adam Cork which premiered in 2011.

"This "verbatim musical" constructs a melodic tapestry from the recorded testimonies of Ipswich residents responding to the knowledge that a murderer of female sex workers lives among them...

"Among London Road's intriguing cast of characters are a working single mother (Colman), a young schoolgirl (Eloise Laurence), and a cab driver (Hardy) who exhibits a suspiciously extensive knowledge of serial killers. In personal interviews and alluring musical interludes, the film runs through the spectrum of attitudes, fears, and prejudices that emerge as the residents respond to crisis. It also shows us a community determined to rise above the grim reputation foisted upon them by the nation's media." (Toronto International Film Festival)

If you want to break your head, London Road wouldn’t be a bad way to start. Oddly, this is not inherently a statement about its quality, just its complication.

Whether it works for you depends on a willingness to indulge the oddness.

An exciting, unsettling experience blessed with imagination and compassion.

Big, bold... works because it wears its theatricality with pride.

Exists in the quarter tones between speech and song, the lilt of voices drifting almost imperceptibly into melody.

There is more to London Road than a just play-being-filmed.

As gripping onscreen as it was onstage, London Road remains a work of great finesse and originality.