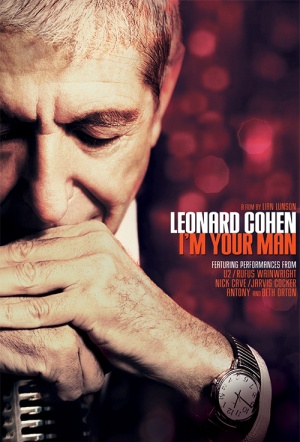 Documentary on the legendary singer-songwriter with interviews and performances by musicians he influenced, including U2, Beth Orton and Rufus Wainwright.

"'I've been a Leonard Cohen fan for as long as I can remember,' says director Lian Lunson. 'He is one of the greatest.' Her film not only provides a record of the performances during the 'Came So Far For Beauty' evening at Sydney Opera House, it also takes us behind the scenes of the show. Along­side interviews with some of the artists who took part in the event such as Nick Cave, Jarvis Cocker, Linda Thompson, Rufus and Martha Wainwright, the film also includes Leonard Cohen himself, wryly discussing his career. His comments are interspersed by archive footage and photographs from his private collection." (Berlin International Film Festival)

At various times poet, consort of beautiful women and Zen monk, his biog's intriguing too, all of which makes this doc highly welcome, even if it's at best a partial view.

It's enough to send fans and converts alike to the Cohen library for more of the master himself.

Hit and miss tribute to the great melancholist.

Cohen is clearly a songwriter's songwriter, and the resulting movie brims with an infectious passion for the man's melodies and sardonic wit. Unfortunately, the performances are interspersed with interview footage that is much less captivating.

Thorough it's not, but the concert documentary Leonard Cohen: I'm Your Man gathers solid interviews, anecdotes, recitations and tribute performances that present a fairly engaging portrait of the wry, dark poet who became a distinct voice.