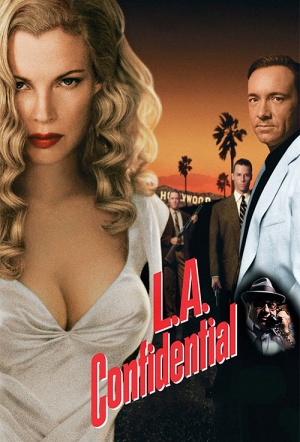 American neo-noir crime film loosely based on James Ellroy's 1990 novel of the same name. Starring Kevin Spacey, Russell Crowe, Guy Pearce and Kim Basinger, this critically-acclaimed adaptation garnered the 1998 Oscar for Best Adapted Screenplay, as well as won Kim Basinger an Oscar and a Golden Globe for her supporting role.

Officer White (Crowe), Detective Lieutenant Exley (Pearce), and Sergeant Vincennes (Spacey) find themselves drawn into a tangled web of violence and betrayal following a multiple murder at a coffee shop in 1950s downtown L.A. The murders lead White to the discovery of a bizarre pornography and call-girl ring operated by Pierce Patchett (David Strathairn), whose women are given plastic surgery so that they more closely resemble well-known movie stars. White's role in the investigation is complicated when he falls for Lynn Bracken (Kim Basinger), one of Patchett's prostitutes, who is the spitting image of Veronica Lake.

An irresistible treat with enough narrative twists and memorable characters for a half-dozen films.

The genius of the film -- and it is a film of genius, without a doubt -- is that it holds an investigation into the human soul's capacity for evil, while somehow still managing to be funny, thrilling, lively, shocking and unremittingly entertaining.

As the emotional nexus, a Veronica Lake lookalike trapped in a web of male desires, Basinger is arguably the pick of a perfect cast. Subtle, shocking, compelling and immensely assured.

Curtis Hanson's resplendently wicked L.A. Confidential is a tough, gorgeous, vastly entertaining throwback to the Hollywood that did things right.

L.A. Confidential is immersed in the atmosphere and lore of film noir, but it doesn't seem like a period picture--it believes its noir values and isn't just using them for decoration.

Its intricate plot is so nihilistic and cold around the heart, its nominal heroes so amoral, so willing to sell out anyone and everyone, that the film is as initially unnerving as it is finally irresistible.

Acted to perfection with more twists than you can shake a stick at.