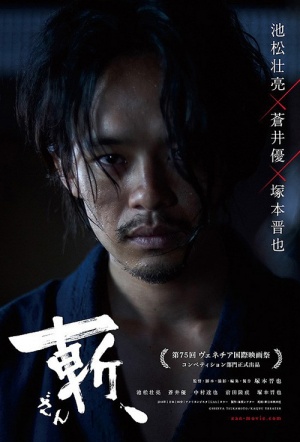 "After about 250 years of peace in Japan, samurai warriors in the mid-19th century were impoverished. Consequently, many left their masters to become wandering ronin. Mokunoshin Tsuzuki is one such samurai. To maintain his swordsmanship skills, Mokunoshin spars daily with Ichisuke, a farmer’s son. Ichisuke’s sister Yu watches them train with a hint of disapproval although there’s an unspoken attraction between her and Mokunoshin. ... Yu is concerned as she senses that Mokunoshin will soon leave to join the impending civil war, and consequently die. One day the three of them come across two dueling samurai. The winner is Jirozaemon Sawamura, a mild-mannered yet skillful ronin. Sawamura stays in the village to look for other potential warriors when a group of outlaw ronin arrives. The villagers have heard terrifying rumours about the outlaw’s leader, Sezaemon Genda. When the hot-blooded Ichisuke takes on the outlaws, the direction of their lives drastically changes." (Venice Film Festival)