Jacky in the Kingdom of Women 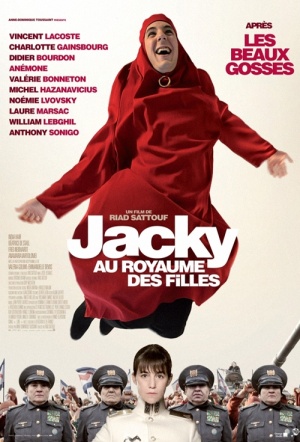 Topsy-turvy political satire from French cartoonist-turned-filmmaker Riad Sattouf. In the Kingdom of Bubunne, women are in power while men wear veils and do domestic tasks. Jacky, a lovely young man who dreams of marrying the Colonelle (Charlotte Gainsbourg) has to struggle like a Cinderella to realise his dreams.

"In the People's Democratic Republic of Bubunne, the women are in power. They rule the country and maintain order, while the men - clad in robes from head to toe - take care of the households. Things are not very democratic; the Generale rules with an iron fist - opponents are hanged. In this strange country, where horses are worshipped and the national cuisine is a slimy gruel, Jacky gets ready for the Grand Ball, at which the Generale's daughter (Gainsbourg) will choose a husband." (Rotterdam Film Festival)

Jacky in the Kingdom of Women / Reviews

Over-sensitive Islamists will cry ridicule, yet the Syrian-born Sattouf skewers all sexist and absolutist notions.

An outrageous political satire... offers up an amusing, and often piercing, critique of dictatorships both past and present, as well as of the female condition in certain Muslim countries.