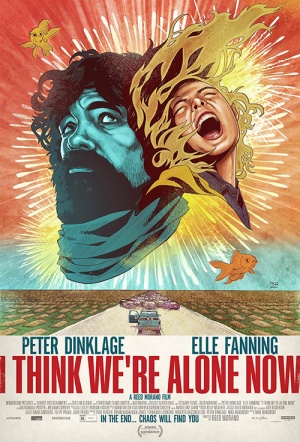 "Del (Dinklage) is alone in the world. Literally. After the human race is wiped out, he lives in a small, empty town, methodically going from house to house, collecting batteries and other useful items, and burying the dead. He dines alone, reads, watches movies, and shelves books in the local library he’s made his home. He’s content in his solitude - until he discovers Grace (Fanning), an interloper on his quiet earth. Her history and motives are obscure, and worse yet, she wants to stay." (Sundance Film Festival)

After its intriguing start, the movie gets dumb and dumberer.

It's more of a relationship drama, one that works as a showcase for two great performances against a post-apocalyptic backdrop that ups the stakes...

Extermination of mankind aside, audiences know this feeling. It's the period after a break-up, when the mourning has passed and the emptiness has been refilled with an adamant independence.

A post-apocalyptic tale with a late plot twist that feels as if it comes out of left field. And right field. And centre field, the stands and the dugout, too.

Drawing on her years as a cinematographer, [Reed Morano] effortlessly crafts a world in which there is no electricity, fashioning every gorgeous scene with hazy natural light and elegant shadows.

Peter Dinklage and Elle Fanning bravely face the end of the world, but they can't overcome a barrage of clichés in a plot that ties up loose ends without a single surprise or a scintilla of genuine emotion.

This low-budget indie is sombre and dreary on a moment-to-moment basis and leaves its talented cast stranded with few opportunities to alleviate the sense of stasis.

The winning performances from Dinklage and Fanning mixed with Morano's confident handle behind the camera make for a most intriguing entry into the post-apocalyptic genre.