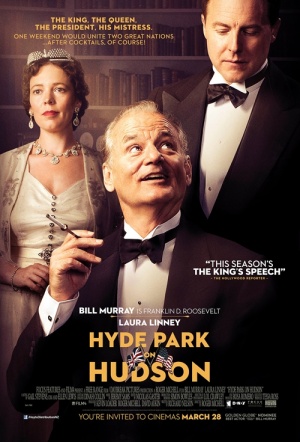 Bill Murray is US President Franklin D. Roosevelt in this comedy-drama, entertaining King George VI and Queen Elizabeth on the eve of WWII at his home in upstate New York. From the director of Notting Hill.

Told through the eyes of his mistress and distant cousin Margaret Stuckley (Laura Linney), Roosevelt and his wife Eleanor (Olivia Williams) host the royal couple (Samuel West and Olivia Colman) for a weekend at the Roosevelt home at Hyde Park on Hudson - the first visit of a reigning British monarch to America. With Britain facing imminent war with Germany, the royals are desperately looking to FDR for support. But international affairs must be juggled with the complexities of the President’s domestic establishment, as wife, mother, and mistresses all conspire to make the royal weekend an unforgettable one.

An unseemly look at the private life of one of America's most revered commanders-in-chief.

More a "King's Speech" footnote than a sequel, Park only flies when Bill's centre stage. We're curious to see how it fares against "Lincoln," the award season's other presidential hopeful.

Hyde Park could have been fawningly ponderous; that it's merely an airy trifle puts it a cut above the usual Oscar bait.

Roosevelt was one of the towering figures of the 20th century, but he and his accomplishments scarcely register in this amorphous, bafflingly aimless movie.

The movie insists on an unearned sentimentality and nostalgia about a situation and a period that is never fully evoked or explored.

This isn't a serious historical film. It plays different instruments than Spielberg's "Lincoln." Murray, who has a wider range than we sometimes realize, finds the human core of this FDR and presents it tenderly.

Though he has competition, especially from the folks playing the visiting royals, Murray is very much the reason to see "Hyde Park."

Bill Murray as FDR? It takes a few minutes to get used to, but once he settles into the role of the 32nd president, the idiosyncratic comic actor does a wonderfully jaunty job of it.

Disappointing given the talent and situation, dull as ditchwater and historically suspect, another "The King's Speech" it definitely is not. Nice costumes, though.