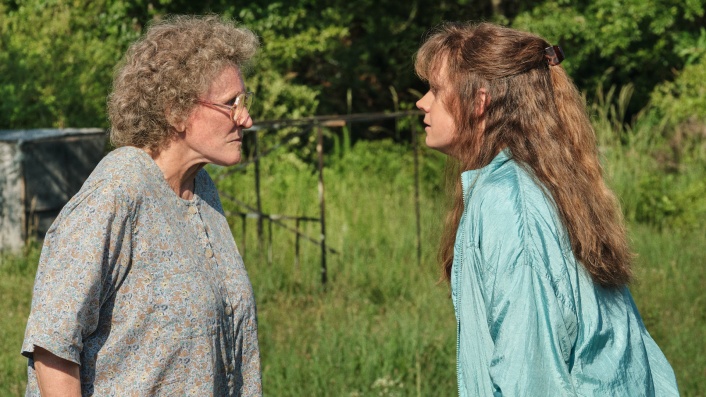 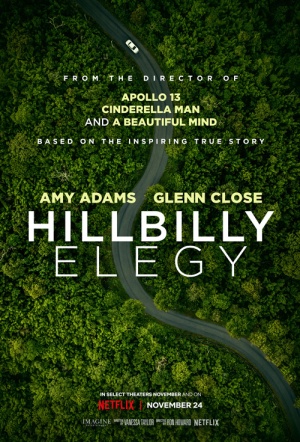 Oscar veterans Amy Adams and Glenn Close lead this multi-generational drama as mother and grandmother to a young boy fighting through years of family woes to achieve his dream of being a Yale law student. Based on the best-selling memoir by JD Vance and directed by Academy Award winner Ron Howard.

JD Vance (Gabriel Basso, The Kings of Summer), a former Marine from southern Ohio and current Yale Law student, is on the verge of landing his dream job when a family crisis forces him to return to the home he’s tried to forget. JD must navigate the complex dynamics of his Appalachian family, including his volatile relationship with his mother Bev (Adams), who’s struggling with addiction. Fueled by memories of his grandmother Mamaw (Close), the resilient and whip-smart woman who raised him, JD comes to embrace his family’s indelible imprint on his own personal journey.

Hillbilly Elegy feels like a bland feel-good story rather than one part of a longer tragedy with no clear end.

This is a well-meant story of someone pulling himself up by his bootstraps, with some help from his grandma. But it feels contrived and self-conscious.

In spite of A-list acting and directing talent, this is a tick-the-boxes recovery and redemption true story that never rings true.

Converting dyed-in-the-wool Appalachian pessimism into honest, bootstrappy uplift is not a task you envy Howard or his cast, as the running time slips away and no concrete point materialises. Elegy is four years late and doomed.

For all of the favors that Howard does to the subject of his biopic, the director can only do so much to disguise the self-serving nature of a story that was always less about where Vance came from than it was about where he wanted to go.

Like the book, the film version of Hillbilly Elegy goes for easy over honest every time, which is one reason why the former has been sharply criticized by those it claims to represent.

Elegy . . . embraces the emotional messiness of a heart-wringing country song, but lacks a haunting refrain to get under your skin.

The main audience takeaway here will be the two main performances by Adams and Close.

As long as Close is acting up an award-worthy storm (her performance is actually quite meticulous), Hillbilly Elegy is never less than alive. Adams does some showpiece acting of her own, but as skillful as her performance is, she never gets us to look at Bev with pity and terror.

Hillbilly Elegy is a well-acted study of a white working-class family reaching for the American dream over three generations, though its disconnected story is what’s unfortunately lamentable.

The book is a fascinating, insightful, touching window into a unique community with immense struggles. On-screen, it’s exploitative.