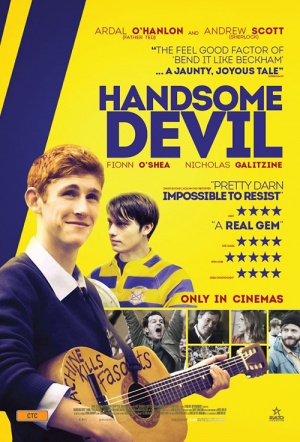 A music-mad 16-year-old outcast at a rugby-mad boarding school forms an unlikely friendship in this Irish coming-of-age tale from director and novelist John Butler.

"With his dyed hair, willowy build, and penchant for sexually ambivalent pop and rock from generations past, 16-year-old Ned (Fionn O'Shea) has never fit in at the rugby-mad boarding school his father insists he attend. Determined to simply keep his nose down and weather another year of loneliness and bullying, Ned is pleasantly surprised when he develops a friendship with his dashing new roommate, Conor (Nicholas Galitzine), a rugby virtuoso with issues of his own.

"The boys bond over music and start to practice guitar together. At the encouragement of their English teacher (Andrew Scott), Ned and Conor enter a talent show at a local girls' school. As both talent show and rugby season loom, however, the pressure on Conor to choose between manly athletic discipline and more artistic pursuits threatens to tear him apart — while Ned is increasingly tempted to betray Conor's trust in order to save his own skin." (Toronto International Film Festival)

Butler tells a perky and entertaining little story, albeit one we've seen some version of many times before.

Heavy-handed at times, but this is a sweet story honestly told.

Some comic moments, but no surprises, and a twee ending.

It's a decent movie, though sometimes becomes a bit sugary, and it's not clear if the comedy is supposed to be rooted in realistic observation or sentimental feelgoodery.

Subtle, but solidly put together, it's a rare "mainstreamed" queer tale that doesn't end in disaster, treat all its gay characters as underdogs or tread a ploddingly predictable path.

Versions of many of the key elements in Irish writer-director John Butler's Handsome Devil are familiar ... But the sweetness, poignancy and breezy humour of this Emerald Isle bildungsroman also make it pretty darn impossible to resist.