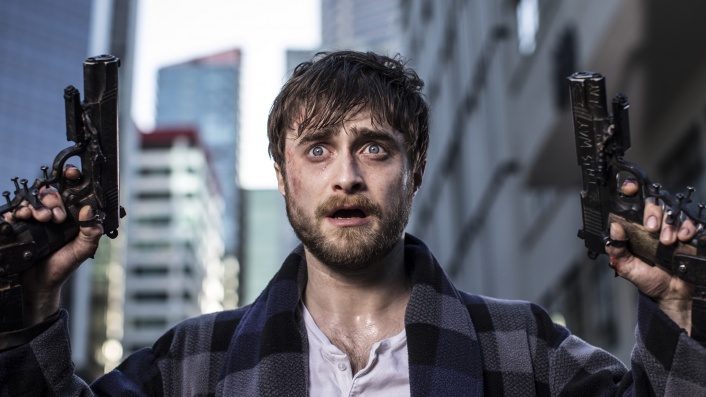 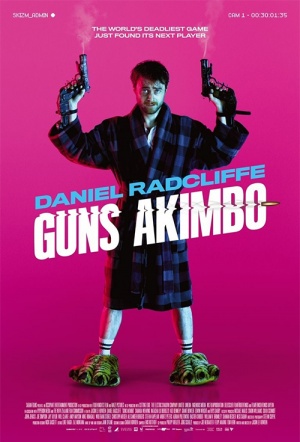 Daniel Radcliffe wakes up with guns stuck to his hands and forced to fight like a gladiator in this action comedy co-starring Samara Weaving (Ready or Not).

"Videogame developer Miles (Radcliffe) is a little too fond of stirring things up on the internet with his caustic, prodding, and antagonising comments. One night, he makes the mistake of drunkenly dropping an inflammatory barb on a broadcast of Skizm, an illegal death-match fight club streamed live to the public. In response, Riktor (Ned Dennehy, An Klondike), the maniacal mastermind behind the channel, decides to force Miles' hand (or hands, as it were) and have him join the 'fun.' Miles wakes to find heavy pistols bolted into his bones, and learns Nix (Weaving), the trigger-happy star of Skizm, is his first opponent. She's at his front door." (Toronto International Film Festival)

What a great idea—a modern take on The Running Man, set in a heightened world of streamer-obsessed shitposters and in the style of Crank: High Voltage. There’s an infectious, wild energy to Guns Akimbo and much of its gleefully crude humour hits its mark well. But a reliance on shitty computer-generated blood and editing that occasionally obscures the good stuff means it doesn’t fully deliver on its potential.

Guns Akimbo is just meant for fun, and its madcap editing style, cartoonish production design and compelling central “hero” make it at least as diverting as the games it mimics.

… not a smart film, but it’s a wryly amusing one that will likely please a late night audience of like-minded friends…

Props are certainly due to Howden himself for his visual and aural flair (the eclectic soundtrack includes the fabulous use of Dead or Alive's You Spin Me Round and Rick James' Superfreak), but the premise's initial promise eventually drains away as Guns Akimbo seemingly slavishly follows familiar beats towards a fairly predictable conclusion.

Guns Akimbo is like doing cocaine with a thirteen-year-old boy.

High-octane assault on the senses that plays like a cross between Crank and The Truman Show. It is as bonkers as that sounds.

An expertly crafted thrill that'll electrify a midnight crowd. It's super ambitious and irresistibly flashy. Director Jason Lei Howden is the real deal and it's only a matter of time before more take notice.