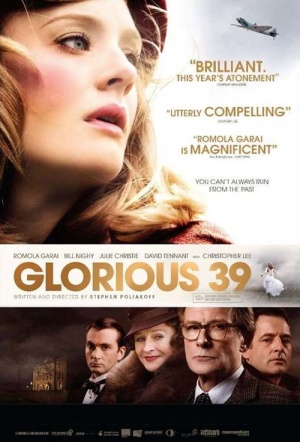 Conspiracy thriller spinning a mysterious yarn about the formidable Keyes - a traditional British family - on the eve of World War Two, thrown into turmoil when the daughter stumbles secret recordings of the pro-appeasement movement...

Anne Keyes (Atonement's Romola Garai) is a politically naive movie star and adopted daughter of a rich Tory MP (Bill Nighy), living at a country estate in Norfolk, England. In the summer of 1939, she stumbles across an establishment plot involving the SIS and the aristocracy. They'll stop at nothing, including blackmail and assassination, to keep Britain from going to war, and when war breaks out, to making peace with Nazi Germany.

Poliakoff's conspiracy thriller about Hitler-pleasers and appalling aristos comes with all the bucolic loveliness you'd expect. But its biggest boost comes from Garai, whose fragile, hypnotic turn should make the actress a gong contender.

The increasingly camp air of menace is actually pretty enjoyable.

Stupendous turn from Romola Garai in the lead role but, while this sets up intrigue and atmosphere well, the plot devices creak audibly towards the end.