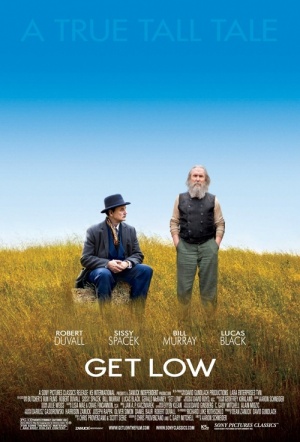 A comedy spun out of equal parts folk tale and real-life legend, set in 1930s Tennessee, about a feared backwoods recluse known as Felix Bush (a fantastically bearded Robert Duvall), who wants to hold a funeral for himself while he is still alive.

Sensing a big payday in the offing, fast-talking funeral home owner Frank (Bill Murray) enlists his gentlemanly young apprentice, Buddy (Lucas Black), to win over Felix’s business. Buddy is no stranger to Felix’s dark reputation, but what he discovers is that behind Felix’s surreal plan lies a very real and long-held secret that must get out.

With a mix of sly humor, homespun grace and affecting poignancy, Get Low casts a well-nigh irresistible spell.

A showcase for Duvall, Murray and Spacek, Get Low will satisfy punters who don’t mind unhurried storytelling as long as it comes with eye-catching performances and a rewarding pay-off.

Though the story sometimes wanders into hazy, corny sentiment, its protagonist (called Felix Bush, which was apparently a nickname or alias of Breazeale's) is vivid, enigmatic and unpredictable.

All of this is just plain enjoyable. I liked it, but please don't make me say it's deeply moving or redemptive and uplifting. It's a genre piece for character actors is what it is, and that's an honorable thing for it to be.

The results are entertaining -- up to a point.

Robert Duvall, Sissy Spacek and Bill Murray lend their mega-watt talents to a undemanding movie. Beautifully shot but let down by an underwhelming final act.

Get Low is a gentle unpicking of an old man's obsessions... and an absolutely terrific character-driven gem of a film.