In a word I thought this film was APPALLING. Not the word I’d like to use but I’ll keep it civil for Flicks.

In fact it was so appalling that 15 minutes into it my four year old daughter walked out. I hoped she was fed up with the movie but secretly feared that she just needed to go to the toilet. But to my dismay she marched out to the foyer of the cinema and started reviewing the giant LED movie menu above the counter. I nearly cried with pride until she pointed at the poster for About Time. ‘No, no’ I said. ‘That’s the sequel to the movie we just walked out of’ I lied. She gave me a look like she had just found a squashed tomato in her pocket. But after I spent 10 minutes explaining that the cinema would not give us a refund or a ticket to another film just because we, I mean she, didn’t like the one we paid to see. She eventually gave in and we went back to finish watching Frozen. And by 'watching' I mean spending the remainder of the film desperately trying to pre-occupy my daughter with my phone and games of pea-knuckle. I even grudgingly let her win a couple of games.

All in all Frozen should have been derailed at the conception stage however it’s clear that Disney are running out of money (and ideas) and dog legged this one out. 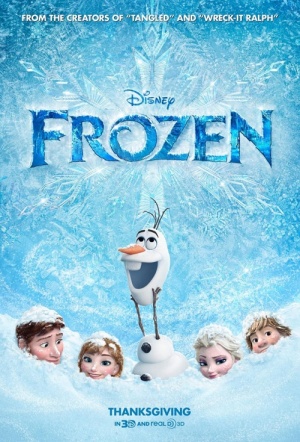