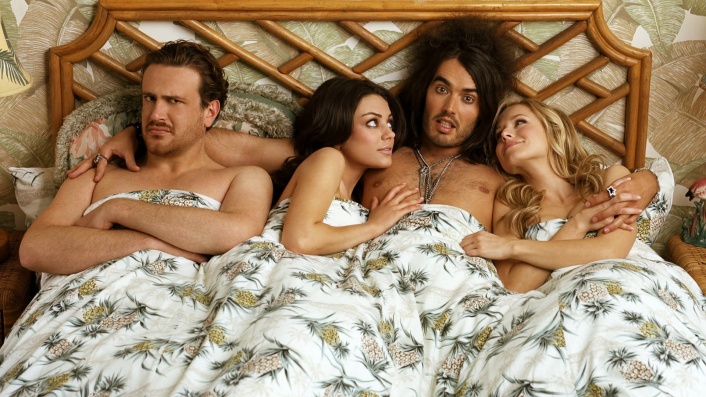 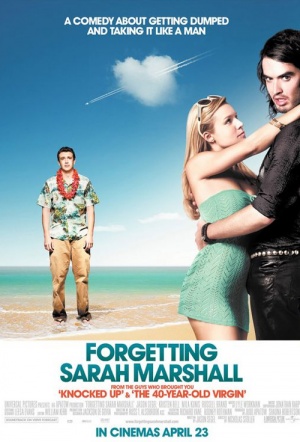 Struggling musician Peter Bretter (Jason Segel) has spent six years idolizing his TV-star girlfriend, Sarah Marshall (Kristen Bell). But his perfect world gets turned upside down when he finds himself dumped and alone. An unsuccessful bout of womanizing and an on-the-job nervous breakdown do nothing to help matters.

So Peter decides to clear his head and take a holiday in Hawaii. But ol' Sarah Marshall is staying at the same hotel with her tragically hip new British rocker boyfriend, Aldous (Russell Brand). Just as things couldn’t get any worse for poor Pete, he meets pretty hotel employee Rachel (Mila Kunis).

Judd Apatow's comedies are always watchable and sometimes hilarious, but with the latest to emerge under his aegis, I have to admit it is getting harder to defend them against the charge of misogyny.

Yeah, it's pretty funny. And it's a pretty accurate depiction of a certain feature of male romantic humiliation. But it's also a little -- and this is one of my two misgivings about the movie -- expected.

It's too soppy to truly please Apatow groupies and too vulgar for rom-com junkies. There are some hilarious parts, but overall Forgetting Sarah Marshall is fairly underwhelming.

A tropical sex comedy that’s a little unfocused, but Segal and co throw plenty of funniness at the wall - and most of it sticks.

Straddling the boundary between chick-flick and dick-flick, Forgetting Sarah Marshall is an enjoyable addition to the Apatow comedy canon. It's not as hilarious as The 40-Year-Old Virgin don't expect to laugh out loud but it should save a few arguments about what to see on date night.

If Peter's imperfections are exaggerated, it's to amusing effect: his frequent heavy sobbing fits can't fail to entertain. And that's one of the genius touches of this comedy. It's prepared to expose the vulnerabilities of its hero and humiliate him completely - to the point where you've just got to love him and laugh at him in equal measure.