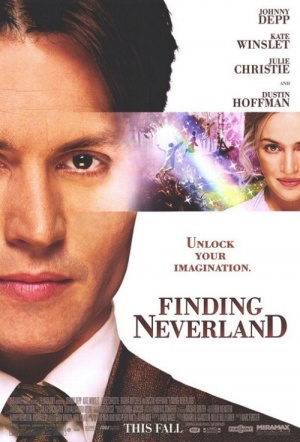 Johnny Depp is Peter Pan creator JM Barrie in this biographical drama following the playwright as he breathes life into his beloved story – and the family that inspired him. Co-stars Kate Winslet, Julie Christie and Dustin Hoffman. Nominated for seven Oscars including Best Film, Best Adapted Screenplay, and Best Actor (Depp).

Following the dismal reception of his latest play, Little Mary, J.M. Barrie meets widowed Sylvia and her four young sons in Kensington Gardens. He proves to be a great playmate and surrogate father figure for the boys, and their imaginative antics inspire him to write a play about boys who do not want to grow up. Barrie's producer skeptically agrees to mount Peter Pan despite his belief it holds no appeal for upper-class theatergoers. Barrie places children from a nearby orphanage in the audience for the opening night show and the adults present react to their infectious delight with an appreciation of their own. The play proves to be a huge success.

Be on the lookout for the subtle reference to 1991’s Hook, which starred Hoffman as Captain Hook.

Depp is a charm. He becomes his own, subtly compelling Barrie.

A rewarding piece of filmmaking that has all the makings of a classic weepie.