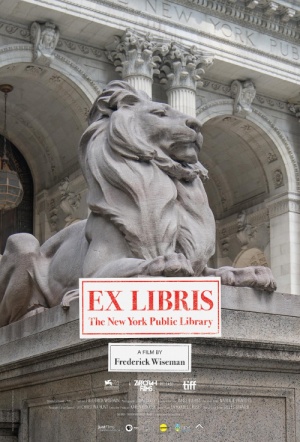 Award-winning documentarian Frederick Wiseman, more than 50 years into his career, goes behind the scenes of New York's Public Library.

"We encounter passionate readers, welcoming staff, budget-focused administrators and inspiring speakers (including Patti Smith and Elvis Costello). Wiseman films in grand marble foyers, crowded annexes and anonymous meeting rooms, creating a mesmerising portrait of a rich and diverse institution. Now in his late 80s, Wiseman has crafted one of the most compelling films of his extraordinary career." (Sydney International Film Festival)

For devotees, this is an enriching way to spend three-plus hours.

A film about the importance of cultural history and truth (two things deeply under siege these days), Wiseman's epic Ex Libris might make you cry with happiness; it's the good fight being fought.