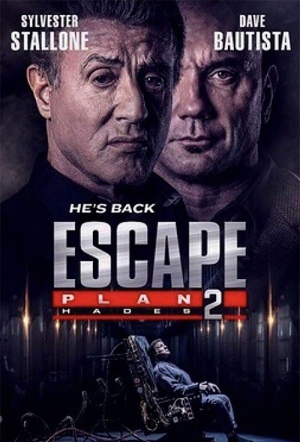 Years after Ray Breslin (Stallone) fought his way out of the escape-proof prison called The Tomb, he’s organised a new top-notch, for-hire security force. But when one of his team members goes missing inside a computerised techno-terror battle-maze known as Hades, Breslin together with Trent DeRosa (Bautista) must decipher a way to break into the world’s best hidden prison, release their kidnapped team, and make it out alive.

The plot, as incomprehensible as it is uninvolving, has Stallone's utterly unmemorable crack prison-break team banged up in yet another off-the-grid illegal jail called Hades.

The whole film is as graceless, lurid and unnecessary as a Stallone painting - but without the winning naivety.

Stephen C. Miller can only cobble together a patchwork of half-realised ideas and poorly executed set pieces into a frenetic, largely indecipherable collage of shapes and sounds.

Escape Plan 2 is essentially a tired, low-rent attempt to create a new franchise, albeit one now relegated to VOD.

A waste of Stallone's talent and star power, not to mention 94 minutes of your time.