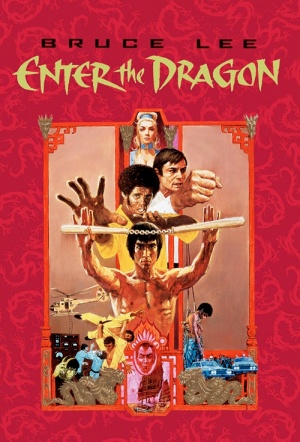 One of the most famed kung fu films ever, Bruce Lee's 1973 Enter the Dragon is a series of superbly staged fighting sequences with a minimum of distractions.

The film stars Lee as a martial-arts expert determined to help capture the narcotics dealer whose gang was responsible for his sister's death. His nemesis operates from a fortified island manned by a team of martial artists, who also host a kung fu competition. Lee uses his skills to enter the contest and fight his way into the dealer's headquarter.

This was Bruce Lee's final film appearance before his death on July 20, 1973.

Rising popularity of the Chinese martial arts as screen entertainment climaxes in fine crescendo in this violence-drenched actioner starring the late Bruce Lee and John Saxon. Film carries all the explosive trappings that make for a hit in its intended market and is glossed with a melodramatic narrative to take full advantage of its theme.

On an adventure level, the performances are quite good. The one by Mr. Lee, not only the picture's supermaster killer but a fine actor as well, is downright fascinating.

The opening drums in Lalo Schifrin's musical score can give you chills.