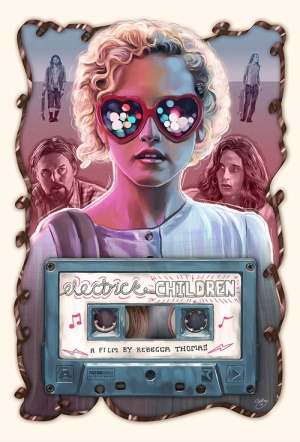 After an 'immaculate conception' at the hands of a cassette tape, a Mormon girl from a fundamentalist Utah community runs away to nearby Las Vegas in this critically acclaimed coming-of-age drama. Stars Julia Garner (Martha Marcy May Marlene) and Rory Culkin (Igby Goes Down). The feature debut from writer/director Rebecca Thomas.

"A group of freaky punks are astonished when a strange girl approaches them as they stagger out of the club. But before long they succumb to Rachel’s innocent charm and decide to take her into the fold. It’s 1996 and Rachel has just turned fifteen... From an archaic Mormon community, she has rushed headlong into the city to escape being forced into marriage by her father. Pregnant, she’s convinced that a forbidden rock song she listened to secretly in the cellar is the cause. She has come to Las Vegas to track down a mysterious red Mustang and the musician who sang Hanging on the Telephone on the tape. As she moves angelically about this brave new world, Rachel stumbles across a surprising secret." (Berlin Film Festival)

Thomas directs with such blithe grace and elegant pacing, and the thesps are so darn cute, any sins are easily forgiveable.

Starting off with delicate brushstrokes, the metaphors start getting heavy-handed by the time she runs away to Vegas, discovering the temptations of Sin City, Rory Culkin’s thrash-metal skater dude and some silly plot twists.

The pleasures of ‘Electrick Children’ are almost exclusively to be found in its photography – all magic-hour desert haze and flickering, unfocused neon – and the performances, which are altogether superb.

So deftly done it's three parts enchantment to one part irritation.

One of the film's greatest successes is the juxtaposition of life within the community with that of the youth culture of Las Vegas (where much of the film is set), offered without any simplistic judgements over which way of life is morally and socially preferable.

Rebecca Thomas's feature debut shows a striking visual promise that's not quite matched by her storytelling.

An interesting and catchy take on a traditional tale of repressed teenage rebellion.