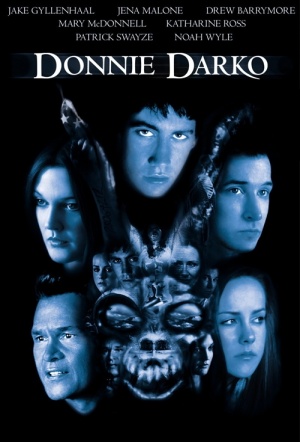 The mind-bending story of the titular teenager (Jake Gyllenhaal), who is plagued by blackouts and bizarre visions that may involve time travel...

Richard Kelly's 2001 cult hit is one self-assured debut. Effortlessly jumping between coming-of-age drama and big unwieldy sci-fi ideas, Donnie Darko manages to feel both frighteningly universal and intensely personal. It was also heavily informed by the '80s setting, which provided a dynamite soundtrack and invoked beneficial comparisons to the great Spielbergian fantasy films of the era.

2001Rating: MA15+, for language, some drug use and violence113 minsUSA
MysteryScience FictionThrillerClassic

A sprawling, surprising, often muddled plunge into the feverish imagination of a disturbed teenager.

A dazzling achievement. It'll have your brain doing exhilarating somersaults.

Kelly is unable to give the movie the kind of pacing that would make us laugh and shock us simultaneously, because he's too infatuated with an aura of hand-me-down gloom.

This set-up and development is fascinating, the payoff less so.

Most [problems] stem from a young filmmaker overswinging on his first time up to the plate and hitting a deep fly out rather than a home run.

A mini-masterpiece that marks the arrival of brave new talents in Gyllenhaal and Kelly. Cult glory beckons.