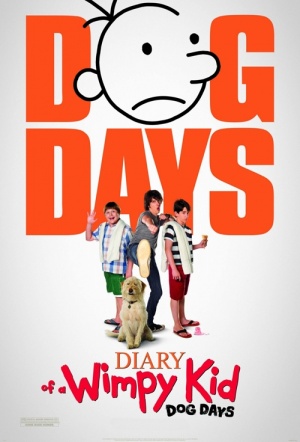 The summer holidays arrive for 'Wimpy Kid' Greg Heffley (Zachary Gordon, returning from parts one and two). To beat the heat and the boredom, he hatches a plan to pretend he has a job at a fancy country club. However, his fake claim won’t save him from embarrassment at the public pools or a disastrous camping trip.

The third film of the series, Dog Days adapts the third and fourth entry of the wildly popular kids book series by Jeff Kinney.

Childminders rejoice: the formulaic but family-friendly series is back and it's business as usual.

Viewers enduring early adolescence or those grappling with its psychic scars will recognize the honesty in the comic humiliation.

It's perfectly workable popcorn entertainment for the school holidays.

Unlike last year's superior 'Judy Moody and the Not Bummer Summer' - which put its grade-school heroine through similarly seasonal woes - 'Dog Days' squanders several chances to find something magical in the mundane.

Greg avoids the curse of the three in the third outing for the Wimpy Kid. Hardly groundbreaking but plenty of fun for its target audience.

Genial and pleasant to a fault, the film could benefit from a little more personality.