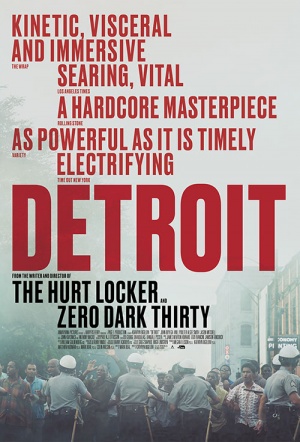 In the summer of 1967, racial discrimination in Detroit reached breaking point and the city erupted into one of the largest citizen uprisings in US history. Detroit zeroes in on one pivotal event during the civil unrest – the Algiers Motel Incident – a motel raid which spiralled out of control as police interrogated guests, ending in tragedy. An ensemble cast including John Boyega (Star Wars) and Anthony Mackie (The Hurt Locker) portray the real-life people before, during and after this defining moment in their lives.

Kathryn Bigelow's latest is the most disturbing and difficult watch of 2017, and it might just be the year's most important film too. It's a masterful tour de force in high tension filmmaking, anchored by a home-invasion horror style second act that is absolutely excruciating. The brutal terrorising of black civilians by white cops in a Detroit motel is portrayed with a clinical realism, maximising the oppression without wallowing in the violence. That it all actually happened means you can't find solace in reminding yourself it's only a movie.

What Bigelow does - incomparably - is put us in that room with those people at that moment. She induces a feeling of powerlessness that's beyond our capacity to imagine on our own, and she keeps it going...

A drama as powerful as it is timely.

Expect Bigelow's deep-cutting drama to be part of the conversation come awards season.

The standoff at the Algiers Motel has entered legend (if not widely known history) as a notorious incident of interrogatory injustice. Bigelow makes it the centrepiece of Detroit and, simply put, has crafted her most harrowing piece of filmmaking.

The film's struggle against simplification - against the sentimentality, wishful thinking and outright denial that defines most Hollywood considerations of America's racial past - is palpable, almost heroic, even if it is not always successful.

Detroit's searing strength lies in its mid-section execution, an interlude of pure hatred and abuse of power...

Intense and physically powerful in the way it conveys its atrocious events, the film nonetheless remains short on complexity, as if it were enough simply to provoke and outrage the audience. It's a grim tale with no catharsis.

A gruelling, nightmarish, ferociously vivid riot epic that recreates one of the darkest chapters in American history. Unflinching, unmissable and terrifyingly pertinent. US TV Spot ('Everything')