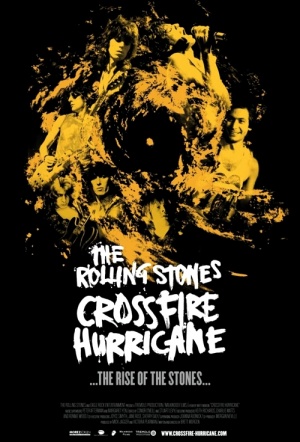 Rolling Stones documentary from the director of The Kid Stays in the Picture, looking back at their career-defining moments - from their first show at London's Marquee Club to the peak of international stardom.

Examining their status as the 'anti-Beatles', the film features historical footage of interviews, news reels and concerts (much of it previously unseen) and commentary from Mick Jagger, Keith Richards, Charlie Watts, Ronnie Wood and former Stones Bill Wyman and Mick Taylor.

Director Brett Morgan "invites the audience to experience firsthand the Stones' nearly mythical journey from outsiders to rock and roll royalty. This is not an academic history lesson." Produced by the Rolling Stones to coincide with the band's 50th anniversary, the title is taken from the opening lines of the song Jumping Jack Flash.

The Rolling Stones weren’t always in the public favour, as this raw and entertaining biopic reminds us. Before they were a global institution, they were cocky teens who played blues covers. Then they became idols whose music and swagger tapped into the youthful dissatisfaction of the 60s...

The funny thing about the Stones’ story is that it includes about twenty years of turbulence and brilliance, then another thirty of stability, belovedness and (relative) creative dormancy.

Just like one of those Stones albums of the last three decades: it's fun, it has terrific moments, but in the end it pales in comparison with earlier triumphs.

'Crossfire' is a different way of making a documentary — only voices in the present and only video in the past. But who said the Stones ever played by the rules?

The Stones have been better showcased and explained than they are in 'Crossfire Hurricane'. Still, as personalities and musicians, they never fail to provide a good measure of satisfaction.

Viewers without much prior knowledge of the band may well be intrigued; fans with too much knowledge may whine a little over what was left out, but should be pleased by what has made it in, and what they haven't seen or heard.

Business as usual from the Stones, and good fun on its own terms. However, anyone expecting buried treasure or fresh insights into ancient rock folklore will get no satisfaction here.

Nothing terribly new, but great fun, all the same. Morgan has assembled a hugely enjoyable, tightly edited journey through the Stones' creative heyday.