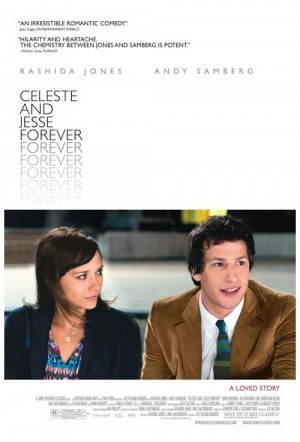 Celeste (Jones) and Jesse (Samberg) married young but grew apart. Now 30, Celeste is the driven owner of her own media consulting firm while Jesse is unemployed and in no particular rush to do anything with his life. Convinced that divorcing Jesse is the right thing to do, Celeste makes the call. But as the reality of their separation sets in and Jesse finds a new lover, Celeste begins to see her decision, which seemed mature and progressive at the time, as impulsive and selfish.

Like her Parks and Recreation co-star Aubrey Plaza in Safety Not Guaranteed, Rashida Jones’ first lead feature role is a likeable enough effort to step out from the tube, but also one that doesn’t deviate too much from her small screen persona.

Earns points for bucking formula, but its fusion of snark and sincerity has a calculated slickness that rings increasingly hollow.

This honest, if not funny, comedy is all about Celeste. If anyone can make you sympathise with affluent LA yuppies, Rashida Jones can.

Jones writes herself a couple of powerful scenes and plays them well, but she and director Lee Toland Krieger don't find many memorable uses for Samberg as her blandly schlubby hubby.

Decidedly conventional in most respects, it's pretty swell as an exploration of a relationship between a man and a woman that's no longer predicated by mutual desire.

Some nice moments, but it's unbearably self-conscious and nowhere does it resemble real life.

What really lifts Celeste and Jesse Forever above the rom-com herd, besides breakout star performances from Jones and Samberg, is the movie's willingness to replace clichés with painful truths. It's irresistible.

I'm not surprised that Rashida Jones took the lead in writing this screenplay; the way things are going now, if an actress doesn't write a good role for herself, no one else is going to write one.

Delivers an affectionate and intelligent look at how even the closest couples can find that breaking up is so very hard to do.

Charming and not without its moments, but far too conventional to capture the complexity it strives for.

A low-fi indie that swiftly slums into terminal feyness.