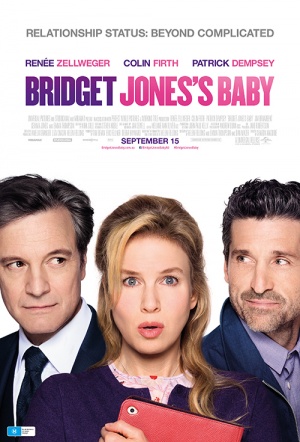 After breaking up with Mark Darcy (Firth), Bridget's (Zellweger) "happily ever after" hasn’t quite gone according to plan. 40-something and single again, she decides to focus on her job as a top news producer and surround herself with old friends and new. For once, Bridget has everything completely under control. What could possibly go wrong? Then she meets a dashing American named Jack (Dempsey), the suitor who is everything Mr. Darcy is not.  When she finds herself pregnant, she can only be 50 percent sure of the identity of her baby's father.

Bridget is older. Single again. We find her awakening to a 43rd birthday, ditched by her friends and scolded for her childlessness by her mother. She faces increasing irrelevancy at her TV news producer job (as much a satire of modern media as aging-woman-in-the-workplace) and after a couple of saucy middle-aged romps with ex-flame Mark Darcy (Colin Firth) and hunky one-night-stand Jack Qwant (Patrick Dempsey), finds herself pregnant and not entirely sure of the baby’s parentage.

Not a comedy for the ages, but it's interesting to see a rom-com starring a middle-aged woman grappling with irrelevance in the workplace.

A warm, witty and welcome return - intelligently evolved and an absolute hoot. As Bridget would say: 'v.good'.

Funny and charming. But what's missing is Hugh Grant as Daniel 'invest in lockable knickers' Cleaver.

Basically, Bridget presides over a kind of coalition government of very good supporting turns which on aggregate enforce their chaotic comic rule over the audience. Just about.

While not all of this helter-skelter rom-com works, this is a welcome reminder of all the endearing and rip-snorting qualities of the original.

She's a breath of fresh air; a character we can relate to because we recognise a little of ourselves in her.

It is agreeably optimistic, faithful to the characters (if not Fielding's third novel) and very funny.

Delivers on what the franchise has always done best.

More than a match for the original, the third outing for Bridget has a solid story with holes you'll forgive thanks to the much-missed onscreen magic created by a director and her leading woman.