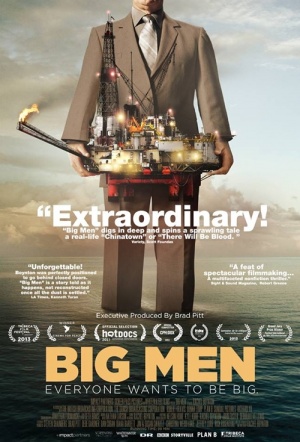 A two-person crew documents the offshore mining negotiations between a Texas oil firm and Ghana government officials, capturing the ensuing fallout when the oil company discovers a rare ‘gold mine’ of an oil field in one of the poorest places on Earth. Produced by Brad Pitt.

"In Ghana, a small American energy company fights to hold onto its discovery of oil just as a new government comes into power. In Nigeria, where oil has already been discovered, the ramifications of the oil industry have taken their toll on the people, most notably those in the Niger Delta who have seen none of the benefits of this new wealth. As the American company falls under the scrutiny of the new Ghanaian government and the US Justice Department, the contracts for the oil field languish. Jobs are lost, power plays are made and all the while, the Ghanaian people wait to reap the benefits. In the Niger Delta, pipelines are attacked and set on fire as militants continue to demand more of the wealth from their government." (Tribeca Film Festival)

This cool and incisive snapshot of global capitalism at work is as remarkable for its access as for its refusal to judge.

About the inherent faults and weaknesses in human nature, and how they manifest in the social systems these innately flawed people construct.