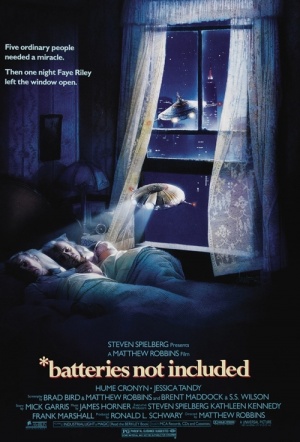 When the elderly tenants of a rundown building are threatened by a property developer, help comes in the form of tiny 'Fix-It' flying machines from another planet in this '80s family fantasy. Stars Hume Cronyn (Cocoon) and Jessica Tandy (Driving Miss Daisy). Originally intended to be featured in the TV series Amazing Stories, executive producer Steven Spielberg pushed for it to be turned into a full length feature. The film also marks the screenwriting debut of Brad Bird, who would go on to write and direct family classics The Iron Giant and The Incredibles.

Could have used more imaginative juices to distinguish it from other, more enchanting Spielbergian pics where lovable mechanical things solve earthly human dilemmas. Still, it's suitable entertainment for kids.

A clever idea: pocket-sized flying saucers with heavy-lidded flashlights. Unfortunately, the schmaltzy tale that accompanies them would make you puke.

It's been well made and, especially in Miss Tandy's case, acted with a sense of fun. But the time for this brand of fantasy may have come and gone.