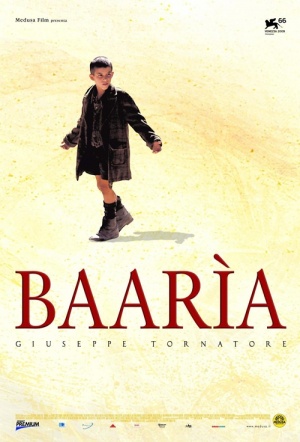 An epic Italian drama spanning several generations of a Sicilian family, from the 1930s to the 1980s. From filmmaker Giuseppe Tornatore (Cinema Paradiso).

"Baaria, the first Italian film to open the Venice Film Festival in nearly 20 years and one of the most expensive movies ever made in Italy, is an epic tale spanning three generations by multi award-winning director Giuseppe Tornatore (Cinema Paradiso)... a lushly romantic tapestry of 20th century Italian life as seen through the eyes of a Peppino (Francesco Scianna) as he grows up, matures, marries and revisits a collection of sentimental memories. 'Baaria' is the dialect term for Tornatore's native Bargheria, and the film unfolds in this hot, dusty Sicilian village where the young Peppino's childhood coincides with the rise of the Fascists, the declaration of war and liberation by the Allies. The older Peppino joins the Communist Party and falls in love with the beautiful Mannina; events that are to shape and define his adult years. Features a score by legendary film composer Ennio Morricone (Once Upon a Time in the West)."