Okay, its not that the other were confusing but at least in this one it's not just a blur of action sequences and buildings/cities being destroyed. Theres plenty of that in this one but it all seems work a bit better. Theres a lineal flow in the storyline here, and as Newell says, Thanos has bit of depth to him. Like all bridal dictators he thinks what he's doing is for the greater good.
Not that theres huge depth - this is just a 'brutal destroyer of planets and galaxies comes for Earth and must be stopped' tale after all. This must have been a dream run for the actors in the MCU because with so many 'characters' involved in this 2+hour effort they only each get a few scenes really. And they get to do it all again next year (yes, already shot, I know) for the conclusion in Part 2. Strangely enough it was the Gardians of the Galaxy cast I found odd in this film but given Gamora's relationship to Thanos I guess they had to be. It's just weird watching a little racoon trying to kick ass. At last Groot is getting a bit bigger. 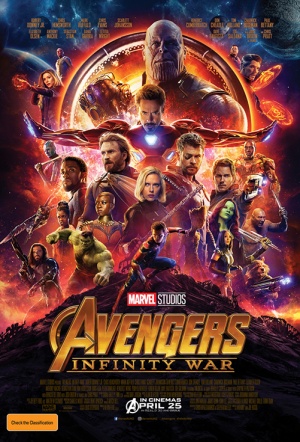