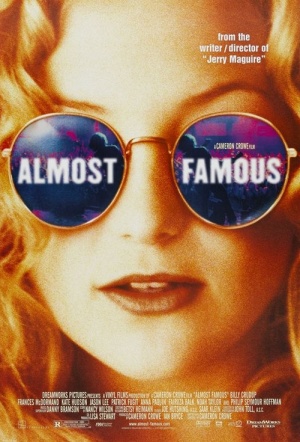 Cameron Crowe’s Oscar and Golden Globe-winning music drama follows a high-school journalist who is granted the opportunity to tour with rising rock band Stillwater in 1973, covering the story for Rolling Stone magazine. The once-in-a-lifetime trip turns into a reality check as the young teen learns the strain of fame, the allure of groupies and the limits of friendship. The movie is a semi-autobiographical account of Crowe's own teeange years writing for Rolling Stone. Stars Billy Crudup, Kate Hudson, Frances McDormand and Zooey Deschanel.

A nostalgia factory of popular music that is less a movie than it is a vehicle for baby boomer reminiscence.

Even though the same points are made more than once, they are never less than entertaining...

Oh, what a lovely film. I was almost hugging myself while I watched it.

Cameron Crowe fondly looks back into his teen years as a young critic for Rolling Stone magazine; a look at the maturation of a well-liked lad is a fairly comon theme among best pic noms.