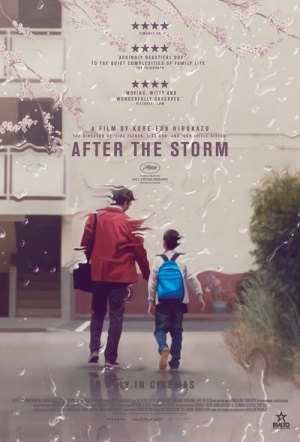 After the death of his father, a private detective with a punishing gambling habit attempts to reconnect with his mother, ex-wife and, most crucially, his young son in this Japanese drama from the director of the sublime Our Little Sister.

Ryoto (Abe Hiroshi) used to be a novelist, but now he's a private detective scraping together the cash to fund his gambling habit, never mind child support. Stranded at his family home during a storm, Ryoto attempts to make amends with his ex-wife and son in this bittersweet tale that screened in the Un Certain Regard programme at Cannes Film Festival 2016.

Such is the finesse of Kore-eda's script that it builds to neither the vehement confrontation nor the comforting reconciliation that melodrama decrees.

Even long-standing fans of the Japanese filmmaker might be taken aback by the supreme subtlety of his latest, achingly beautiful ode to the quiet complexities of family life.

Kore-eda looks sensitively at the deep roots of unquenched anguish, but he constructs the characters too neatly and the situations too precisely for the drama to seem like anything but a well-meaning lesson.

It's a film that sticks with you.

Filmed and assembled with such wit, economy and precision that nothing in the film is allowed to detract from the absolute perfection of the writing and the performances.

The filmmaking is so exquisite and the acting so calibrated it sticks with you.