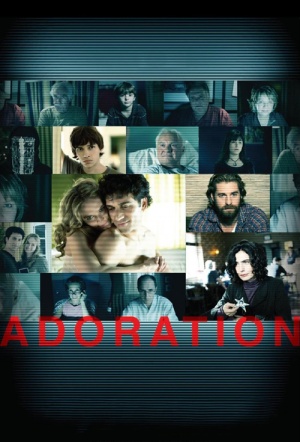 Drama from respected Canadian-Armenian director Atom Egoyan (Where The Truth Lies), a drama posing questions about identity, family and morals in our modern, internet-driven world. Teenager Simon (Devon Bostick) lives with his uncle (Scott Speedman). Some years previously his father had crashed the family car, killing himself and Simon’s mother. But Simon has always suspected it may not have been an accident. In the course of a high school assignment, Simon writes an article in which he reworks his family's past and then puts the piece on the internet, effectively giving himself a false identity. He then starts to use this to try to investigate what really happened.

Atom Egoyan's remarkable new film "Adoration" is a haunting meditation on the nature of received wisdom and how it can warp individuals, damage families and even threaten society. Shot on beautifully utilized film but employing images vividly from the Internet and mobile phones, it's an examination of the power that false ideas may have on people's imagination and beliefs when they are repeated over and over.