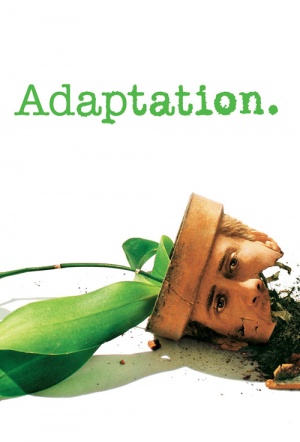 A troubled screenwriter writing an adaptation written by a troubled screenwriter writing an adaptation. Charlie Kaufman's insanely genius script, based on Susan Orlean's novel The Orchid Thief said as much about the writer's own neuroses and anxieties about Hollywood as it did the character's, played with compelling self-loathing by Nicholas Cage. Spike Jonze (in only his second film after Being John Malcovich) expertly oversaw acting talents Meryl Streep, Tilda Swinton and Chris Cooper as they flirted with the psychedelic borders of a seriously labyrinthine script.

Cage and Jonze share a casual, daredevil sensibility, and the two of them -- or should I say the three of them? -- pull off one of the most amazing technical stunts in recent film history.

Cage gives one of the best performances of his recent career as the Kaufmans. He's a natural in this role, especially when that great horse face breaks into an ingratiating grin...

Both Kaufmans are played by Nicolas Cage, whose goofy, moon-faced sincerity has never been put to funnier use.

What a bewilderingly brilliant and entertaining movie this is.

Kaufman and Jonze take huge risks to ponder the whole notion of passion -- our desire as human beings for passion in our lives and the emptiness one feels when it is missing.