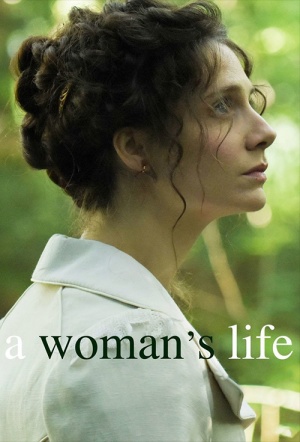 An adventurous young 19th-century noblewoman is harshly judged for an unfortunate marriage in this Venice prize-winning period drama.

Normandy, 1819. Jeanne (Judith Chemla) is a young woman full of childish dreams and innocence when she returns home after finishing her schooling in a convent. She marries a local Viscount, Julien de Lamare (Swann Arlaud), who soon reveals himself to be a miserly and unfaithful man. Little by little, Jeanne's illusions are stripped away.

A moving, beautifully modulated adaptation of Guy de Maupassant's novel, in which a young noblewoman copes with the loss of ideals.

Brizé pays more attention to the tasteful costumes and the alluring settings than to the drama or the images.

The power of Mr. Brizé's film - and of Ms. Chemla's quietly volcanic performance - lies partly in the way ordinary disasters erupt in Jeanne's life, at once challenging her passivity and emphasising her helplessness.

Chemla is a perfect choice for the lead, whether she is exuding happy expectancy from life as a young girl, stubbornly standing by her hopelessly spoiled brat when she shouldn't, or gradually losing her mind towards the end.

We warm to Jeanne's plight not because it is so relatable or familiar, but rather because every turn feels so vivid and so enveloping.

The camerawork, production design and costumes are all impressive, though the technical credit that most deserves a shout-out is the makeup and hair by Garance Van Rossum.