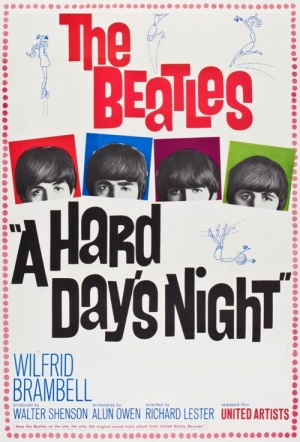 The first and most successful Beatles movie - made at the height of Beatlemania in 1964. Depicting a couple of days in the lives of the group, the Beatles travel from Liverpool by train for a London TV show. Nominated for Best Screenplay and Best Music at the 1965 Academy Awards, the film is considered one of the best musical films of all time - described by Roger Ebert as "one of the great life-affirming landmarks of the movies". Features the songs A Hard Day's Night, All My Loving, Can't Buy Me Love and She Loves You amongst others.

Charged with vitality, and inventiveness.

The mop-tops are likeably relaxed, with Lennon offering a few welcome moments of his dry, acerbic wit.

It's a fine conglomeration of madcap clowning in the old Marx Brothers' style, and it is done with such a dazzling use of camera that it tickles the intellect and electrifies the nerves.

One of the great life-affirming landmarks of the movies.

The film is mad, mad and crazy, shrewdly designed for the teenage and calculated also to attract the curious and the oldsters who enjoy this sort of thing.

Great band, great music, great film. Not only that, it remains a fascinating portrait of Britain on the cusp of change.

Lester's innovative film is a timewarp memento of that brief 1963-4 phase in their history known as Beatlemania.