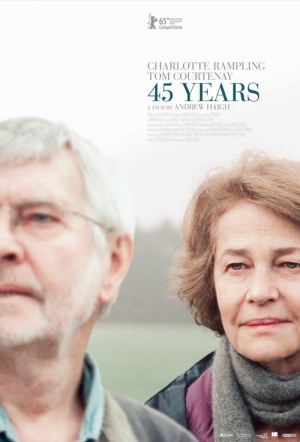 Geoff and Kate Mercer (Tom Courtenay and Charlotte Rampling in award-winning performances) are a week away from their 45 year wedding anniversary. What should be a time of celebration for this childless couple enjoying rural retirement is derailed by the news that the body of Geoff's first love has been found, preserved in the glacier she fell into fifty years earlier.

While Geoff is visibly rattled, the effect on Kate is more subtle. As she explores her husband's photo archives, making fresh discoveries about him while trawling through his past, Kate finds herself overcome by jealousy and doubt.

"Outwardly, everything is business as usual. But the camera cautiously registers how a well-tuned coexistence is going out of kilter. Whether over a shared breakfast or a lonely wander through the town, Kate feels more and more like a stranger in her own life. 45 Years tells the story of two people who, caught up in unexpected emotions, are forced to bolster themselves against unfamiliar feelings and, in doing so, have the rug pulled out from under their feet. After 45 years, which feeling will prevail on the couple's big day?" (Berlin International Film Festival)

The mechanics of a happy marriage are subtly put to the scalpel in writer/director Andrew Haigh’s measured drama, an ever-so-British response to the likes of Amour. Based on David Constantine’s short story In Another Country, it finds Kate (Charlotte Rampling) and Geoff (Tom Courtenay) living out a contented retirement in the countryside and preparing to celebrate their 45th wedding anniversary.

It's a film of small moments and tiny gestures that leaves a very, very big impression.

Haigh’s very fine, classically modulated film keeps these questions alive until literally its last shot, and lets them jangle their way through you for days afterwards.

Mr. Courtenay, a naturally demonstrative actor, registers a convincing blend of longing, confusion and shame. Ms. Rampling, a stiller, deeper-running pool, conveys emotions so strange and intense that they don't quite have names.

A moving and absorbing drama featuring two performers offering a lifetime's wisdom and technique in their performances.

A quietly explosive film, a potent drama with a nuanced feel for subtlety and emotional complications.

A searing drama charged with raw, yet poignant fury.

Full of restraint, from both its director and leads, this is a quiet gem with the power to move.