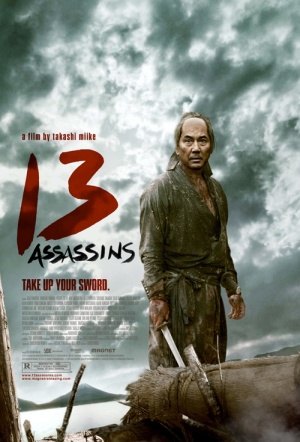 Cult Japanese director Takashi Miike (Audition) takes a break from his lunatic-laden thrillers to deliver this periodic samurai epic (in the proper sense of the word).

At the withered end of Japan's feudal era (along with samurai influence), a group of unemployed samurai are enlisted to bring down the Shogun's sadistic above-the-law younger brother, Lord Naritsugu. With the country threatening to plunge into a war-torn future, this band of assassins commence a final stand in order to prevent the masochist from ascending into power.

This is a remake of Eiichi Kudo’s 1963 black-and-white film of the same name.

It’s worth going out of your way to see the aforementioned battle scenes on a big screen, as such visual spectacle more than makes up for the film’s other weaknesses and won’t be nearly as impressive on DVD.

This at first slow-moving and then wildly kinetic actioner possesses a cool classicism.

Takashi Miike's period samurai drama takes a while to get going, but the fight sequences make it worthwhile.

13 Assassins will floor connoisseurs of action, mood and the dignity of a pissed-off scowl.

The film is terrifically entertaining, an ambitious big-budget epic, directed with great visuals and sound .

A beautifully lensed but rather unremarkable Japanese period piece.

A decent historical drama, with one of the best extended battle scenes (a full half of the movie is the face-off in the ‘village of death’) in recent memory.