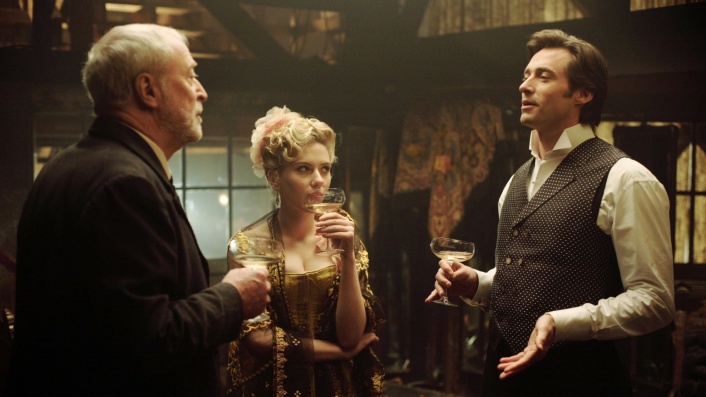 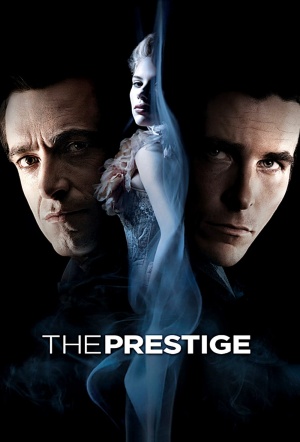 Set in a stylised late-Victorian world of duelling music-hall magicians and diabolically clever inventors, [like director Nolan's previous work], 'The Prestige' has a puzzlelike structure, zipping around in time and scattering clues throughout its busy scenes and frames.

It begins with a death and proceeds through a murder trial and its aftermath, using flashbacks within flashbacks to deepen the mystery it promises to solve and changing points of view to misdirect our attention. At the center are two ambitious young magicians, Robert Angier (Jackman) and Alfred Borden (Bale), also known as the Professor. They start out as friends and fellow apprentices, but quickly become bitter personal and professional rivals. Their enmity stems from an accidental onstage killing, and before long it is hard for them to disentangle the desire for revenge from the impulse toward one-upmanship.

Clearly, director Nolan is aiming for something else. But the delight in sheer gamesmanship that marked his breakout "Memento" doesn't survive this project's gimmickry and aspirations toward "Les Miserables"-style epic passion...

Stuffed with hard-working actors, sleek effects and stagy period details, The Prestige, directed by Christopher Nolan from a script he wrote with his brother Jonathan, is an intricate and elaborate machine designed for the simple purpose of diversion...

Nolan directs the film exactly like a great trick, so you want to see it again the second it's over. I'd call that wicked clever...

If The Prestige is something of a let down as a magic trick, it's more successful as a tale of obsession. The rivalry between the magicians is brutal and bloody and Bale and Jackman do their best work when they're plotting each other's downfall...

When all is said and done and you get the full explanation of what meant what and who did what to whom, it's not fulfilling at all. It's a magic trick that's all showmanship and craft, but lacking true whimsy, ultimately failing the audience...