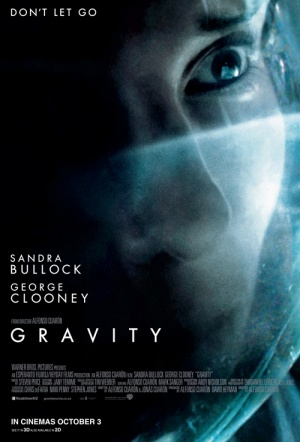 Sandra Bullock and George Clooney star as two lone astronauts stranded in the terrifying expanse of space after satellite debris wipes out their shuttle. Winner of seven Academy Awards, including Best Director for Alfonso Cuarón (Children of Men).

Dr. Ryan Stone (Bullock) is on her first shuttle mission while Matt Kowalsky (Clooney) is in command of his last flight before retiring. On a seemingly routine spacewalk, disaster strikes and the shuttle is destroyed leaving Stone and Kowalsky completely alone – tethered to nothing but each other and spiraling out into the blackness. All links to Earth are lost and their oxygen supply gradually empties. As panic sets in, the pair realise the only way home may be to go further out...

One of the most exhilarating experiences I’ve had in the cinema in recent memory, Gravity made me realise how few and far between the best moments in other event films of late have really been. That’s not because Gravity boasts freaking awesome special effects, that it gets more out of its 3D and IMAX presentation than other pics or subjects the audience to repeated, sustained vertiginous sequences - though it does all these things in spades, any of which in isolation are the equal of highlights seen elsewhere.

The director’s long-overdue follow-up to “Children of Men” is at once a nervy experiment in blockbuster minimalism and a film of robust movie-movie thrills, restoring a sense of wonder, terror and possibility to the bigscreen.

This isn’t just the best-looking film of the year, it’s one of the most awe-inspiring achievements in the history of special-effects cinema. So it’s a shame that – as is so often the case with groundbreaking effects movies – the emotional content can’t quite match up to the visual.

The film thrums with an ongoing existential dread. And yet, tellingly, Cuaron's film contains a top-note of compassion that strays at times towards outright sentimentality.

In short, it's one hell of a ride.

At once the most realistic and beautifully choreographed film ever set in space, Gravity is a thrillingly realized survival story spiked with interludes of breath-catching tension and startling surprise.

Gravity asks for nothing more than your surrender. Be seated, don your 3D glasses (and 3D is its medium), and let it unfold. No prior knowledge required.

Clip: I've Got You