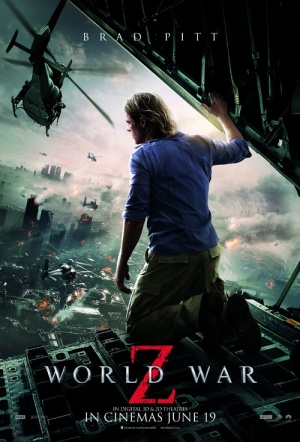 Brad Pitt stars in this blockbuster horror as a U.N. employee called upon to establish the origins of a zombie pandemic. As he travels from the U.S. to Israel, Korea and Wales in search of answers, cities and nations fall under the onslaught of undead, leaving mankind's slim hope of survival resting on his shoulders. Based on the best-selling novel, from the director of Quantum of Solace.

Gerry (Pitt) has retired, but his skills as a U.N. investigator are the only reason he and his family are plucked from the zombie chaos in Philadelphia. Lane is pressed back into service and asked to travel the globe looking for the origins of the zombie outbreak. As he travels he finds himself in one life-threatening situation after another - from a Jerusalem laid siege to a Korean air force base gone suspiciously silent, and even a mid-air zombie encounter. To save his family and humanity, Lane will have to survive increasingly vicious events as well as solving what seems to be an unexplainable unnatural phenomenon.

Amongst all the chatter that the zombie concept is played out, consider that the closest these horror staples have come to a blockbuster depiction is the Resident Evil series – something that leaves ample scope for improvement. As the title suggests, World War Z follows the cascading plague of undead around the globe via a series of clashes, stalemates and counter-attacks, and from its broadest, most removed perspective the film offers an enticing blend of action, disaster, pandemic and horror.

A surprisingly smart, gripping and imaginative addition to the zombie-movie canon.

Choosing quantity over quality, intensity over tension and big-screen thrills over low-fi shocks – this is probably what the zombie apocalypse will actually look like.

Choosing quantity over quality, intensity over tension and big-screen thrills over low-fi shocks – this is probably what the zombie apocalypse will actually look like.

The result looks less like a horror flick and more like a thinking man’s action-thriller – the ‘Newsnight’ of zombie films (you’ll know if that’s your cup of tea).

While some of World War Z is rotten, the whole stands as a punchy, if conventional action thriller.

This nightmarish travelogue is coy about gore, but it’s still an effective thrill-ride. If the sequel happens, let’s hope it delivers some actual combat.