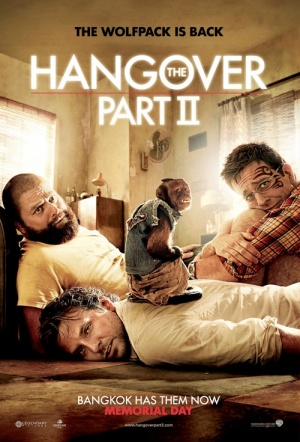 This time Phil, Stu, Alan and Doug travel to Bangkok for Stu’s (Helms) wedding. After the bachelor party in Las Vegas, Stu's taking no chances and has opted for a safe, subdued pre-wedding brunch. But one quiet drink before bed turns into a night worthy of a sequel. The next morning they awake with baldness, Tyson facial tats, a monkey and a missing brother of the bride-to-be...

The rote professionalism on display verges on cynicism, and despite some occasional sparks, this ranks as a considerable disappointment.

Like any night on the town, the memories are more fun, rather than the reality of what went down.

Darker and meaner than the original but just as funny and horrifying. And like the best stag do’s, sure to be recalled in the pub for weeks afterwards…

The funniest, most reckless moments in The Hangover Part II, the largely mirthless sequel to the 2009 hit "The Hangover," take place in the final credits.

Is this some kind of a test? The Hangover, Part II plays like a challenge to the audience's capacity for raunchiness.

Manages to deliver more laughs than most of the competition.

According to Phillips, the 'Part II' in the title is a nod to the second "Godfather," which matched the genius of its forerunner. Ironically, his own sequel offer is one you should refuse.