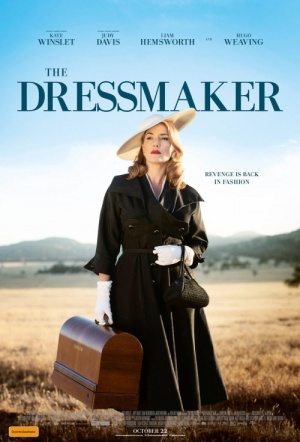 Kate Winslet is a revenge-seeking femme fatale in this period comedy-thriller adaptation of Rosalie Ham’s novel. Glamorous Tilly (Winslet) returns to her small hometown in rural Australia to pay back those who wronged her, armed with a sewing machine and haute couture style. Co-stars Liam Hemsworth, Hugo Weaving and Judy Davis.

Tilly Dunnage (Winslet) makes a surprise return to her tiny hometown of Dungatar to look after her ailing mother (Davis). It doesn't take long for the glamorous, single globetrotter to set dusty small town tongues wagging, and old resentments to present themselves. As Tilly takes on the foes of her past, there are frocks to be made, and a local hunk (Hemsworth) to flirt with... and maybe a little more.

Old-fashioned in both setting and tone, The Dressmaker is certain to appeal to the older arthouse set, though unlikely to win anyone else over. Ostensibly a revenge-filled black comedy, though fairly toothless, it’s also an opportunity for Kate Winslet to revel in the role of creative, cosmopolitan (and curvy) protagonist Tilly Dunnage as she wreaks havoc on her small country hometown with couture and culture-challenging behaviour ill-befitting stuffy 1950s Australia.

It’s surprising how well The Dressmaker coheres, albeit more along narrative lines than tonal ones.

A hodgepodge of comic melodrama, more panto than pathos.

The film’s major blunder – it’s got plenty of competition – is mistaking Kate Winslet for Rita Hayworth.

If Moorhouse's film sometimes falls out of step, then it at least has the self-belief to go out in a blaze of glory.

One of the best Australian movies in years.

Enormously good fun, especially if you love clothes and enjoy a makeover montage.

Boasts enough manic energy and straight-up weirdness to keep you entertained before overstaying its welcome in the final act.

In addition to the inspired direction of Jocelyn Moorhouse, The Dressmaker draws ably on the united effort of an appreciably committed cast.